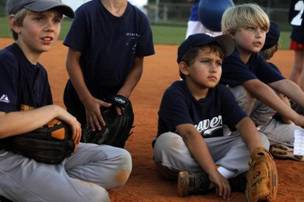 Will Lejeune, 8, and his teammates on the Brewers prepare for opening night play in the Sanibel Babe Ruth League at the Sanibel School on Friday. About 150 children, boys and girls from ages 3 to 9, signed up for teams. / Photos by John David Emmett/news-press.com February 26, 2012

The crowd gathered excitedly. The mayor was there. So was Miss-A-Miracle.
This was, after all, Sanibel’s first official opening day for youth baseball.
Chuck Phoenix and several others in attendance hoped it would also be remembered as the day Sanibel started getting serious about its baseball.

“We’ve got a great culture out here,” said Phoenix, the president of the newly formed Sanibel Babe Ruth League who will also be coaching the league’s Rookie Tigers and the Majors Cardinals. “It’s a very collegial environment, and we’ve got great players, but one thing we didn’t really enjoy was the ability to compete at a higher level.

“So the idea with going to the Babe Ruth League was to compete at a more competitive level, and we have the players to do that.”

After years of starting kids off in its small recreational leagues, Phoenix and others worked hard the last year to put together the more structured, organized Babe Ruth League. They hope it means an end to having the same two teams play each other week in and week out, as well as to watching Sanibel’s best players shift off the island to seek better competition elsewhere.”It was a struggle,” said Kevin Ruane, the mayor of Sanibel and a frequent volunteer in the island’s youth baseball scene in the past. “It was always difficult because you’d develop a child and they’d start to go through the system, and suddenly they’d leave. So I think (the move to a Babe Ruth League) made a lot of sense.

Phoenix is planning for league teams to more regularly play off-island competition and form an all-star team at the end of the season to take on the best players from Babe Ruth teams from around the area.

When they do, Phoenix plans to have Sanibel’s players ready. The league has brought in University of Alabama coaches and former professional player Julio Zuleta in the last year to run clinics and is making sure all coaches are certified.

“I don’t think anyone’s doing the things we’re doing to train players at a higher level,” said Phoenix, who also runs a law firm. “We focus on each one individually. It’s a family.”

The early returns Friday night were unsurprisingly chaotic for the first-year league, with parents looking for volunteers to umpire after the first games had begun and managers trying to figure out how many innings the games were meant to last.

But parents could already see the improvements. Frank and Maria Tata hadn’t yet ruled out moving their son Frankie to another league after last season, but were feeling a lot better about keeping him in Sanibel on Friday night.

“We had talked about that last year, but then we heard about Babe Ruth and all they were doing,” Frank said. “I think if it continues to get better, (Sanibel’s youth players) will definitely stick around.”

Some of the more experienced players were pretty excited about the changes, too, which by Phoenix’s estimation had led to a 15 percent increase in player registration to 160 spread among 14 teams.

“It’s nice to not be playing the same team every time,” said Camilo Lilleslatten, 11, of the Majors Mets, who saw the Majors extend from two teams to three. He was excited about playing teams off the island.

“It’s sorta exciting to go somewhere else and play, too.”

The night’s newcomers were just excited to get out on the field for the first time.

“On the way here, he said, ‘What do I do if I catch the ball?'” said Kim Williams of her 9-year-old son Case, a new member of the Rookie Rays. “He’s never played. It had just hit him that he was going to his first game.”

Signup for our newsletter to get the latest news, updates and special offers in your inbox.